What is a certificate of analysis & why is it important?

When buying a product, it is reasonable to believe that what you see on the label is what is in the package, and vice versa. Unfortunately, too often, the opposite is true for CBD products. (Bon-Miller et al., 2017; Hazekamp and Epifanova, 2017) There are various ways to check which products are the most trustworthy, and one of them is acquiring a so-called certificate of analysis.


A certificate of analysis, or COA, is a document that contains testing results, confirming that a product meets its product specifications. The specifications are the criteria to which a product should conform to be considered acceptable for its intended use. These specifications can be extensive and quite specific, and the ingredients on a label typically reflect a part of the product specifications. (see Figure 1) Besides the list of ingredients that are to be in the product, COAs can also serve as a warrant that toxic ingredients do not exceed permissible limits or that they are absent altogether. The regulations that dictate what can and cannot be in a product are partially under the control of national agencies. For cannabis-based products, state-level requirements apply.

Various types of testing can take place at different production stages. For example, if your raw plant material contains heavy metals, you do not want to discover that at the very end, after you have gone through all the effort of finalizing a product. The following section breaks down the Green Earth Medicinals’ specific way of testing. Other companies might do it differently.

Production stages at which testing happens:

Biomass: The first tests analyze the raw plant material that comes in, called the biomass. If there are any issues with the biomass, it does not get processed further.

Extract: After the plant material goes through the extraction process, a new testing round is done to determine the relative change of ratios of the extracted constituents. In order to know exactly how much extract to put in the final product to achieve the target cannabinoid concentration, this concentration must be determined.

This testing round also aims to assess the presence and levels of any contaminants. Just as cannabinoids are more concentrated in the extract, relative to the biomass, so too are any pesticides or other dangerous or unwanted compounds, if they are present. By testing the extract, we may find these contaminants, even if they were too dilute to be detected in the biomass.

Finished product: Once the has been bottled and packaged, production is final and randomly chosen finished products are analyzed for their chemical profile and to confirm the consistency between units within a batch. This is to ensure that the final cannabinoid concentration matches the concentration that is stated on the label. Green Earth Medicinals wants to make sure that no formulation or manufacturing errors occurred in the production process. Microbiological contaminant tests are done to ensure that cleanliness was maintained throughout the manufacturing process. Bottled products receive a visual inspection as well, to check for any detectable defects.

Now that you know at which stages of a production process the tests take place, let’s have a look at the types of tests:

Cannabinoid levels: Tests that determine the quantities of cannabinoids typically focus on the top ten most important and commonly prevalent ones. Although there are more cannabinoids in cannabis plants, their quantities are usually very low. Cannabinoid level testing is sometimes also called potency testing and mainly refers to the testing of THC+THCA or CBD+CBDA.

Terpene levels: This test measures the quantity of the most important cannabis terpenes.

Heavy metals: These tests analyze the quantities of heavy metals. It is not uncommon to find them in or on cannabis plants, but they are supposed to stay below a permissible threshold that is not considered harmful to our health. Common heavy metals that are tested for include arsenic, cadmium, lead, and mercury.

Pesticides: The amount of residue from various pesticides, such as fungicides and insecticides, is also measured, and, just like heavy metals, it should stay below certain levels. The list of pesticides that are tested for varies per state.

Foreign matter: This wide-range category tests for the presence and quantity of potential residual solvents such as butane, propane, and ethanol, as well as other chemicals that are unwanted in plant material.

Microbial contaminants: This test looks at the presence of microbes or microorganisms, such as bacteria, yeast, mold, or fungi, as well as the toxic compounds they can produce. Their quantification is counted as CFUs, or Colony Forming Units (see Figure 2).

Stability: Stability testing observes how long the product stays similar over time under various storage conditions. Storing your cannabis product in full sunlight and high temperature will decrease its quality much faster than keeping it in the dark at or below room temperature.

To understand which test is for which material, we have included the testing table (see Table 1).

How to read a COA?

Let’s look at crucial information on the COA.

First of all, you want to know that the information you look up refers to YOUR product, and nothing else. You can simply check this by comparing the batch number on the package in Figure 3A to the batch number of your COA in Figure 3B. Also, make sure that the product description at the top of the page is the same as your product (Figure 3B). 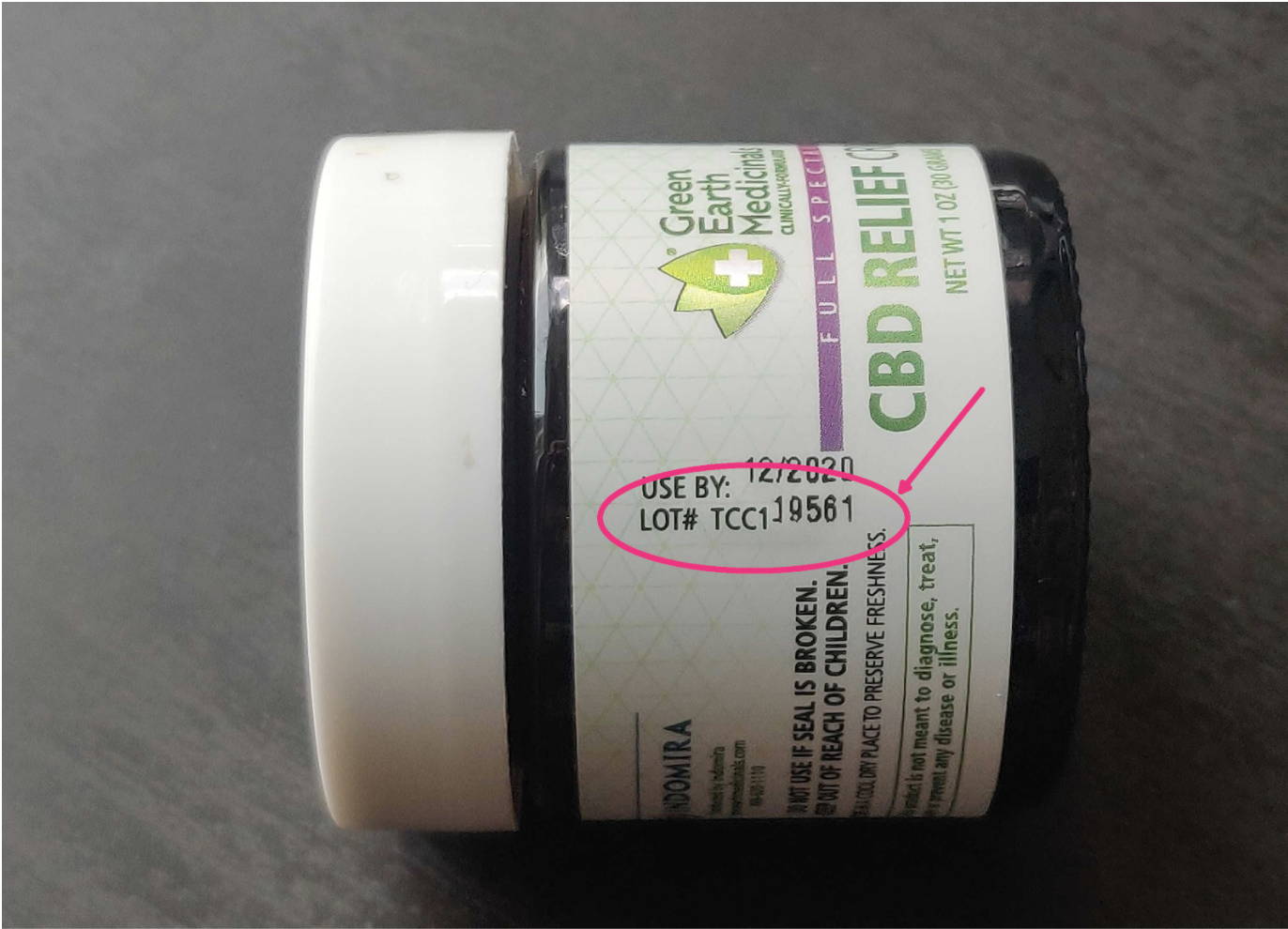 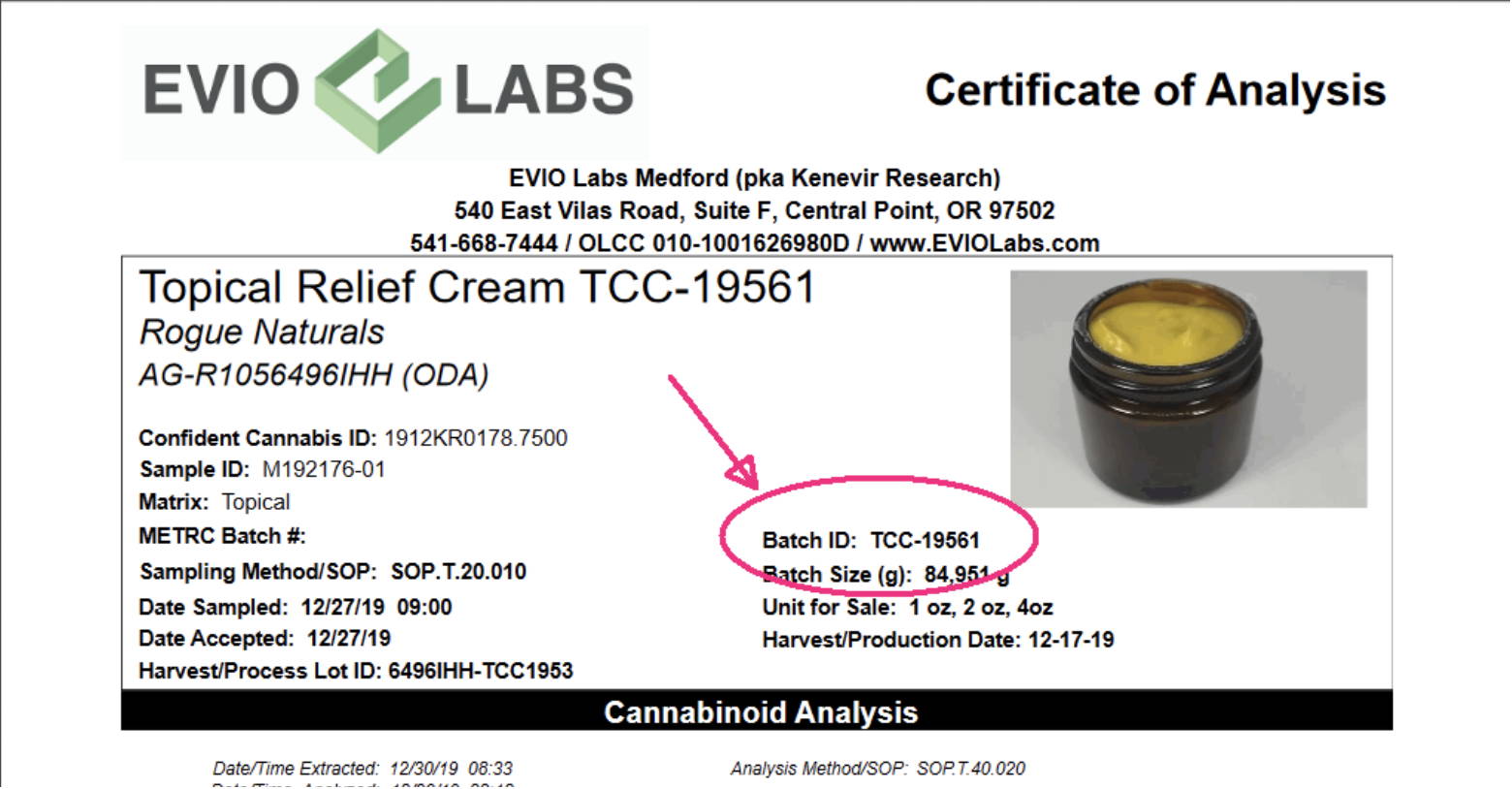 Figure 3B. Compare the batch number of your product with the batch number on the COA. These need to be identical. Green Earth Medicinals’ system works as such that the three letters refer to the stock keeping unit (SKU) followed by the batch number. On the product itself, there is one to two numbers extra between the SKU and the batch number (e.g. TCC1-..., in Figure 3A). This number refers to the size of the SKU, in this case, the 1 stands for 1oz.

Next, you want to make sure that your tests are done with a lab that is independent of the manufacturer (see Figure 4). 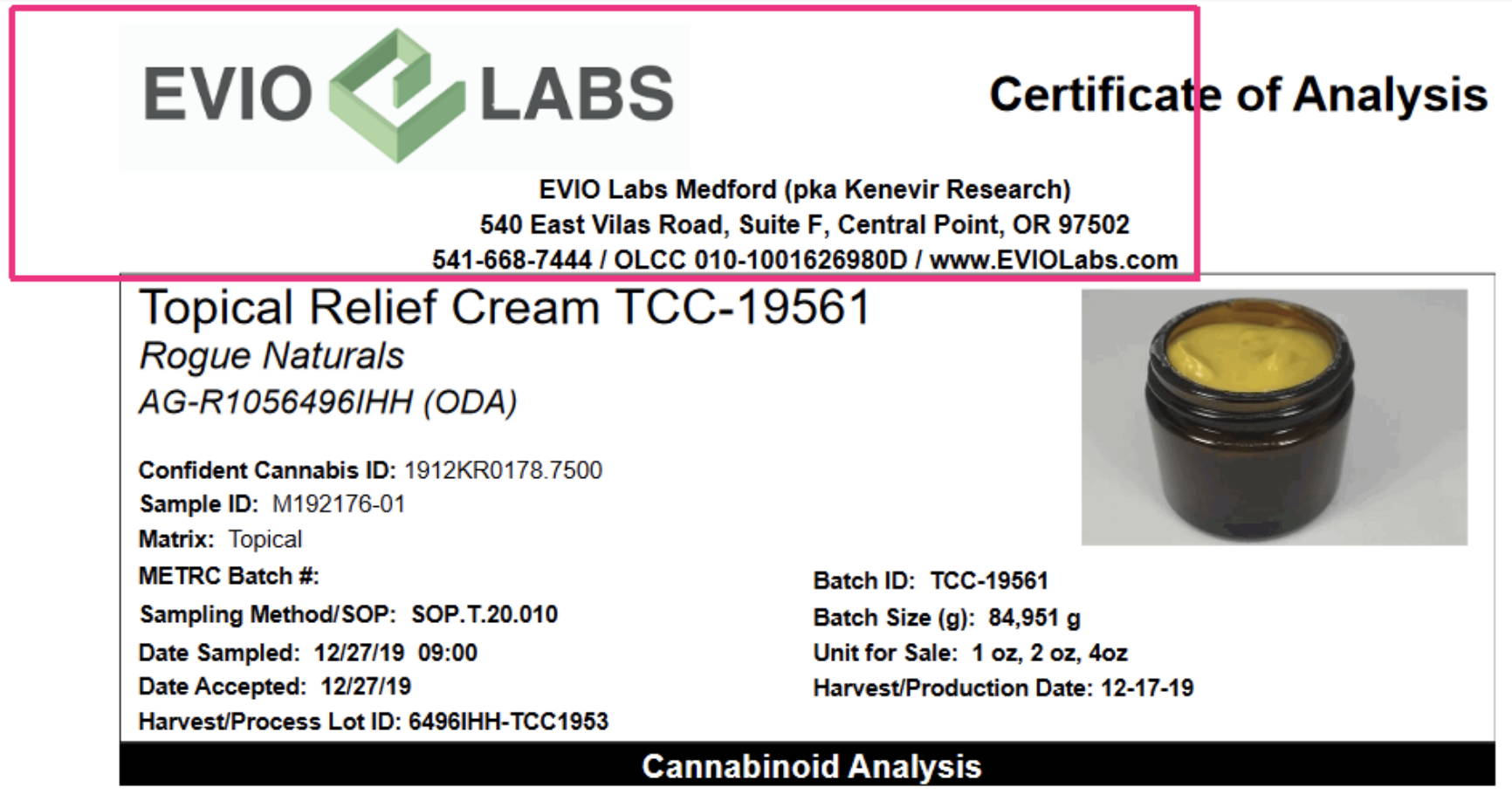 Figure 4. Check if a third-party laboratory tested your product.

Now we want to look at the actual test results and the desired outcomes. Let’s look at the various steps given in Figure 5: 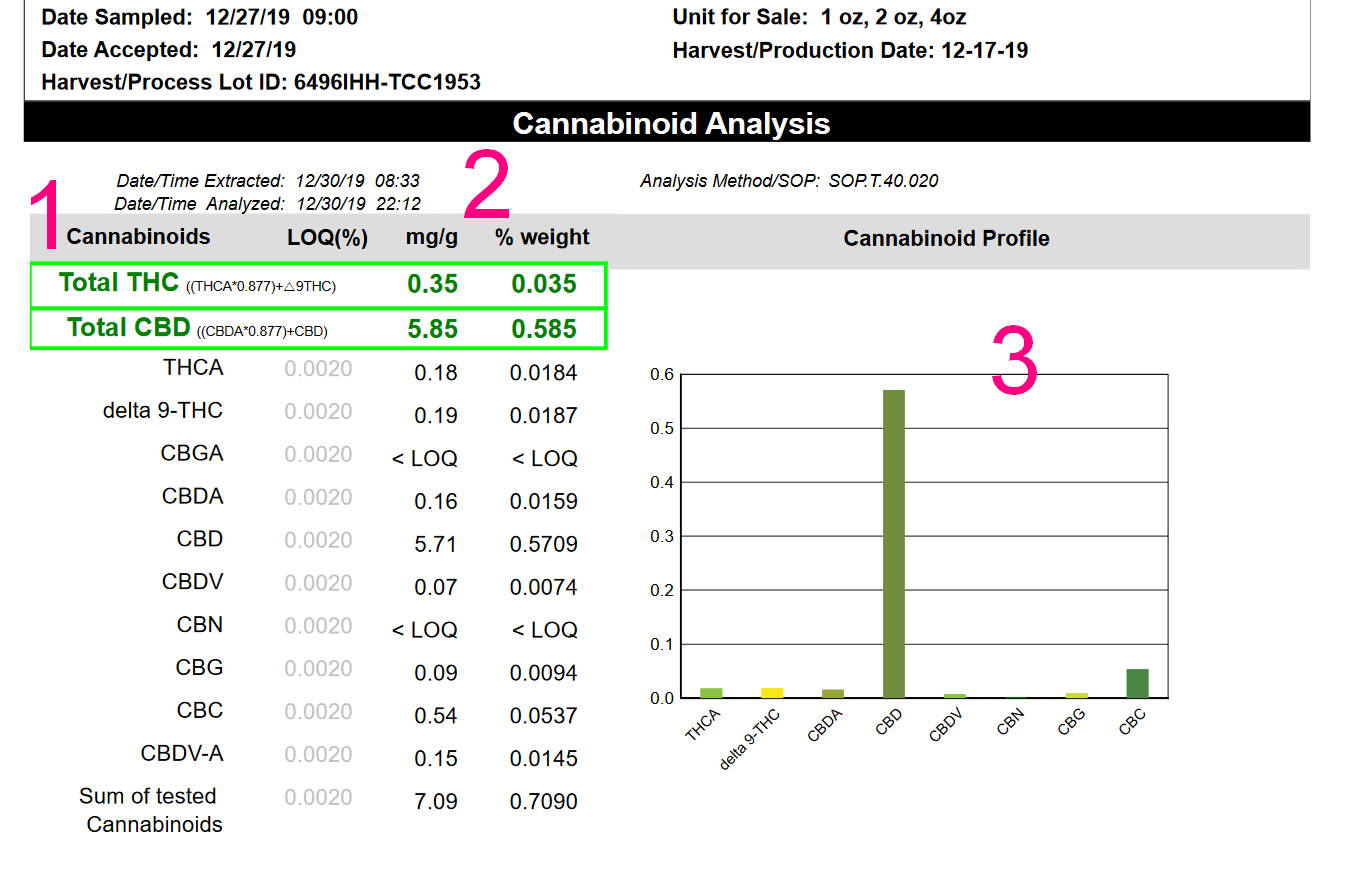 A sublingual administration form goes under the tongue. This can be a tincture, a spray, a tablet (see illustration), etc. 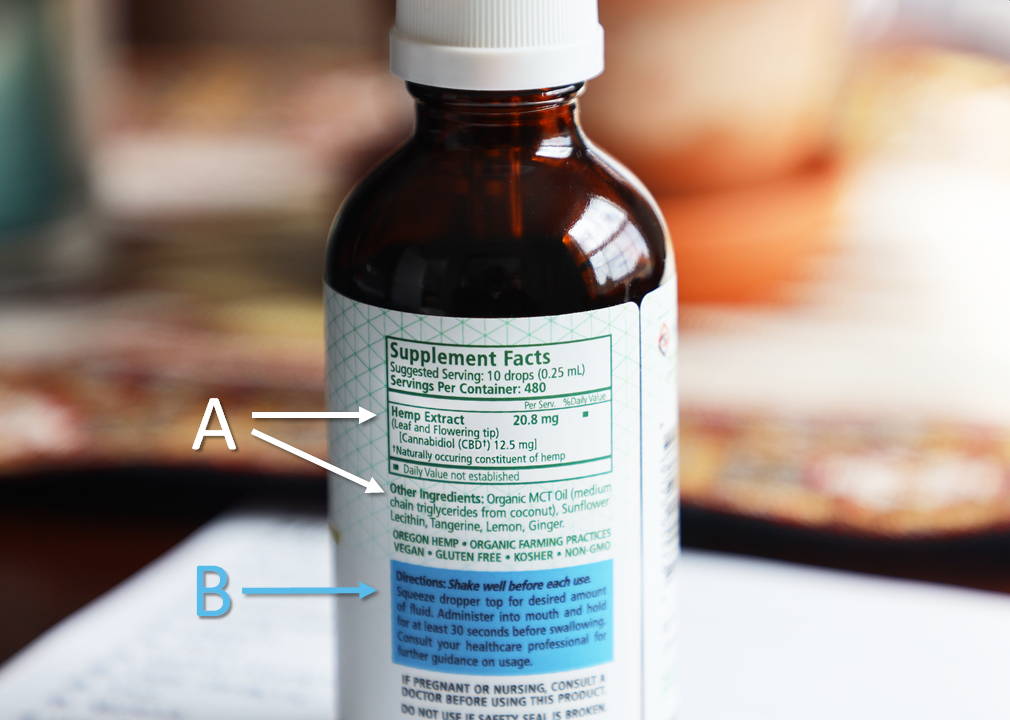 Microbial contamination is tested in Petri dishes and quantified by Colony Forming Units, or CFUs. 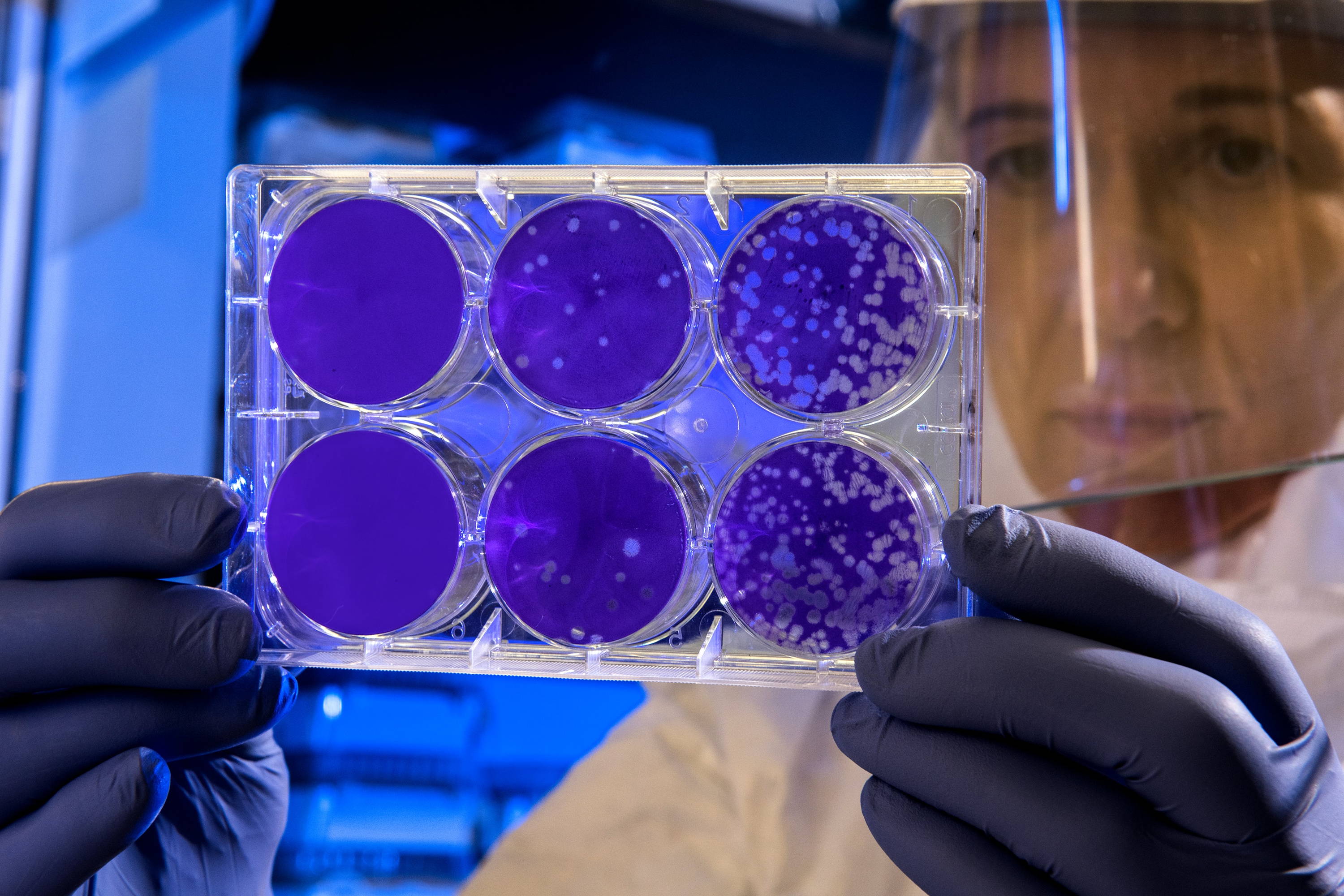